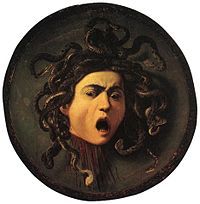 Medusa was once a beautiful, fair woman and was being courted by Poseidon in the temple of Athena. Athena was angry that Poseidon liked Medusa so much and was jealous of her beauty so she cursed Medusa. She was transformed into a hideous monster with serpents for hair. Another part of the curse was that anyone she looked at turns to stone. Eventually a hero named Perseus defeated Medusa in a battle, and chopped off her head to return to Athena.

http://www.factmonster.com/biography/var/medusa.html (Medusa)
Here is a video of "Clash Of the Titans" with Medusa in action:
http://en.wikipedia.org/wiki/Medusa (Photo Credit)
http://www.youtube.com/watch?v=39pesl6J6e0&feature=related (Video)